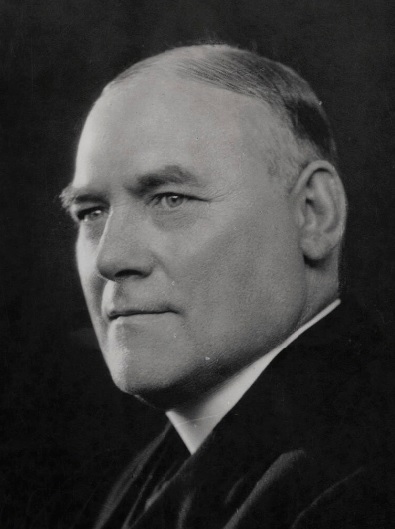 The Very Revd James Simpson was the Dean of Peterborough from 1928 to 1942. He was ex-officio President of the Guild from 1928 after succeeding the Very Revd Arnold Page in the post.


James Gilliland Simpson was the son of the late D C Simpson, a merchant in London and Liverpool. He was born in London on October 16, 1865, and was educated at the City of London School and at Trinity College, Oxford, where he took a second in Classical Moderations, a first in Literae Humaniores, and, staying up a fifth year, he took a first in Theology in 1889. The degrees of B.D. and D.D. were conferred upon him in 1909. Trained for the priesthood at Cuddesdon, he was ordained to a curacy at Leeds in 1891 but his great capacity, both as a teacher and as a preacher, led to his appointment two years later as Vice-Principal of Edinburgh Theological College. Then came five years as rector of St. Paul's, Dundee, to which he joined the duties of examining chaplain to the Bishop of Brechin, followed by 10 years as Principal of Leeds Clergy School. His nomination by the Crown to be a canon of Manchester and rector of St. Philip's, Salford, came in 1910, when he had already been select preacher at Oxford the previous year.

His piety, deep learning, and eloquence led to a great demand for his services as a preacher, while his experience at two training colleges made his services as an examining chaplain peculiarly valuable, and he was ever ready to help to the utmost of his capacity. His gift for quick and. sound decision is well illustrated by his action when, as canon in residence in St. Paul's on November 11, 1918, he was conducting the 10 o'clock service, he received word from Buckingham Palace that the armistice was signed. He seized his opportunity, mounted the pulpit and announced the fact to the congregation, and so made almost certainly the first public proclamation of the event in London. When later he received word that the King intended to come the next day for a public thanksgiving, he was able, thanks to his own capacity and the celebrated discipline of St. Paul's to improvise an impressive service that showed no trace of the haste with which it had been devised. His busy life as a teacher, preacher, and administrator left him little time for writing, and none at all after his appointment to Peterborough. Up to that time, however, some half-dozen volumes came from his pen at rare intervals, culminating in his exposition of Catholic Evangelicalism in 1927.