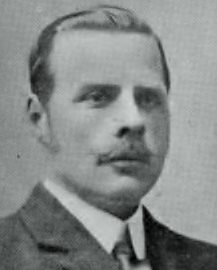 We much regret to record the death of Mr Fred Wilford, formerly Secretary and later Master of the Peterborough Diocesan Guild, who passed away at the age of 66 years on January 11, 1937 at Chapel Brampton, Northants, where he had been living since retiring from the service of the Northampton Corporation Water Department. For some time past Mr Wilford had been in indifferent health. He leaves in bereavement a widow, with whom much sympathy will be felt.

Born at Ringstead, Northants, Mr. Wilford went to Northampton in 1887 and served an apprenticeship as a plumber and then in 1903 he was appointed a water inspector under the Northampton Corporation.

He began his ringing career at St. Giles', Northampton, in 1897, at the time when the bells, having been rehung, and increased from eight to ten, a new band was being formed. He was then already a member of the choir and superintendent of the Sunday School.

In 1901 he was made foreman of St. Giles' belfry and held the office until 1909. When, in 1905, the Central Northants Association was split up into districts, Mr Wilford was appointed Secretary of the Northampton District, and in the following year was elected General Secretary of the Association.

He was largely instrumental in the transformation of the Central Northants Association into the Peterborough Diocesan Guild in 1924, and was elected Master. He held the office until 1935. On his resignation he was succeeded by the Revd E S Powell. In October of that year Mr Wilford's services to the Guild were recognised at a special meeting at Northampton, when he was presented with a roll of notes and an album suitably inscribed, which contained, the names of 436 Subscribers.

In 1904 he was elected a member of the Central Council for the Central Northants Association, and remained a representative of this Guild up to the time of his death.

Mr Wilford's services to Northamptonshire were, indeed, great. He laboured ungrudgingly in the cause of the art, and his personal example was a great encouragement to all who had ringing at heart. For many years he made a point of attending all the quarterly meetings throughout the district and often assisted, as a licensed lay reader, in conducting the services.

He had rung about two hundred peals, of which he had conducted a considerable number, and was a member of the following associations: Bedfordshire, Midland Counties, Yorkshire, Oxford, Kent, Middlesex and London County.

The funeral took place at Chapel Brampton on Thursday January 14, 1937.