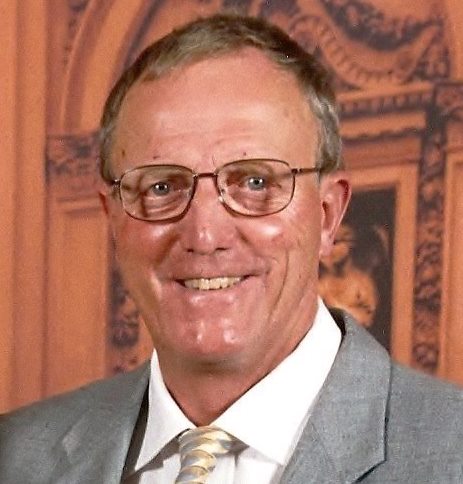 The funeral for Richard Chater was held at St Andrew’s Church in Harlestone, Northampton-shire on Monday, March 21st. The tenor was tolled before the service by Jamie Reese of Earls Barton. Immediately after the service a band arranged by Peter Clifton for Maureen Basford (St Andrew’s Tower Captain), rang Richard away. There was then a general ring whilst the family made its way to the Counties Crematorium.

Richard began ringing in Moulton when he was about 8 years of age. He was elected a member of the Guild in 1953 with his father. He transferred to Harlestone in 1966 after marrying Pam Bosworth in October of 1965. Pam took up ringing for a while and in early April found a photo of them holding the ropes after their wedding.

They lived in Harlestone for 16 years before moving to Duston. They have two sons, Nigel (Louis) and Nick who both have two children and live in Cornwall and Spratton.

Richard was Tower Captain at St Andrew’s Church from 1965 until 1972. He taught many people to ring, including local youngsters.

Ten years ago his health deteriorated. Once he had recovered he again took up ringing with enthusiasm and found his way to Whilton, Daventry, Braunston, Badby and Greens Norton.

He was re-elected a Guild Member for Daventry in January 2011. Last year he rang for all the weddings at St Andrew’s. He was always very encouraging in a quiet way and will be missed by many in the towers.

Richard died whilst ringing for a wedding at Daventry.