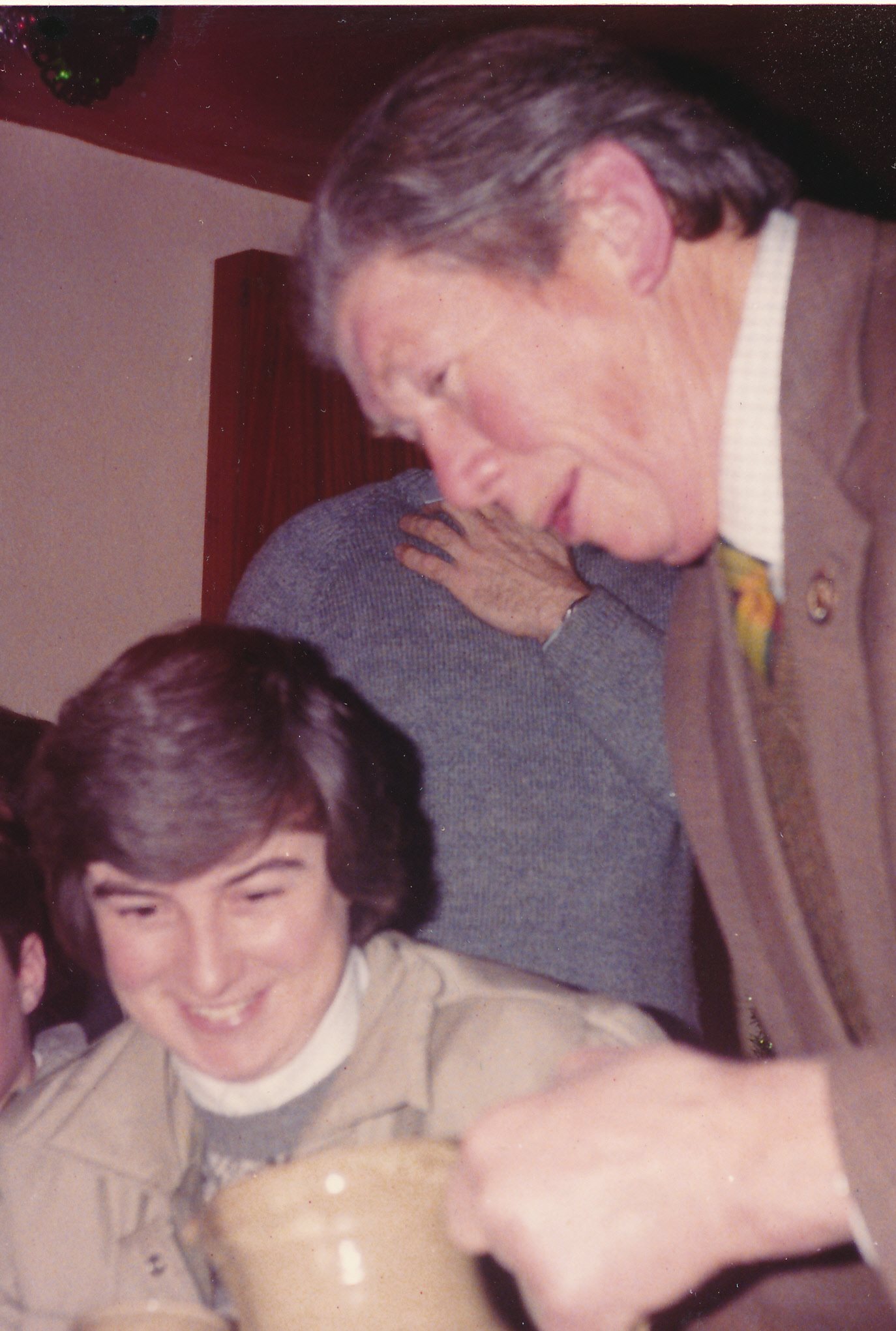 Fred Hutt was born in Byfield on Holy Cross day 1915 and lived there all his life except for the time he was on active service with the Sherwood Foresters in Africa and Italy. He died at home on 28th April after spending a typical evening at the club. In September 1938, Fred first got his hands on the 5th rope and was encouraged by George Haynes to try to get it up. After several weeks of trying, he succeeded. To ring on Sundays he had to wait until Mr Ayles was sick when he was allowed to take his bell until he was better. He went on to be tower captain for 56 years. He temporarily took over winding the clock in 1948 and gave up when it was electrified in 1991! Janet and Fred were married at the chapel in 1949. They had no children. Fred sought her patient permission to spend a considerable amount of his time ringing and at the pub. When Janet died in 1993, he continued to live in Potter’s End behind the wrought iron gate with a bell worked into it. Typical Fred - he set to and learned the art of cooking and made full traditional meals.

He was a chorister for 74 years at Holy Cross, Byfield. He was churchwarden from 1959 covering six rectors. When he retired he was made churchwarden emeritus. He was well versed in how to deal with interregnums. He wrote full instructions in 1993 for his funeral, including a contingency plan if he died during one, which he did. The service was taken by former rector (1962-1971) the Revd Andrew Freer. The organ was played by his friend, choirmaster and organist of many years Eric Bates and the full choir sang his chosen hymns and psalm. From the full church, his coffin was carried to be buried west of the tower, draped with St George’s flag for England, by four of the 1980s band with the organ playing Land of Hope and Glory. Fred was proud of being educated at the village school but went on learning all his life. He had a great sense of integrity, humour, tradition, occasion and history. Robin Rogers had the guild master’s badge rehung after adverse comments from Fred about its upkeep and only on the previous Saturday had hoped Fred could see how well it was being kept.


“You don’t want to keep hearing about the war"

He thrived on military life and serving with the Sherwood Foresters gave him a huge fund of experience, comradeship and tales. He made annual pilgrimages to their memorial at Crich and to the reunion in Nottingham. He made a return visit to Tunisia in 1993 with old comrades. Fred was described as conservative, not reactionary, during his funeral. He had, perhaps reluctantly, accepted lady priests, lady members of his beloved College Youths and knew that a lady rector is to arrive in September. He hated the use of ‘person’. Chairman and ringing master is the title whether man or woman!


“Hello Fred, what are you doing here?”

Fred had no car, but in the early days, bicycles and the many train services available from the village enabled him to get about the country widely. In later times he always found a lift. He met the famous and was particularly proud of being photographed with Bishop Jenkins at the Durham & Newcastle dinner in 1985. In 1980 Carole and I took Fred to the LUSCR dinner, where a guest speaker said "Hello Fred, what are you doing here” (a phrase heard in towers and pubs in many parts of the country!) It was only after descending from St Nic’s on Friday night that he told me that it was his first ring on 12. Fred instigated a Christmas outing followed by an evening of self-made entertainment which has become a tradition. The highlight was his psalm, sung in four parts, which recorded events of the year. In support of home crafts, Fred had a ringers’ jug and mugs made (see photo). Ringing out the old year was also a tradition featuring one of the band drinking in the belfry whilst standing on their head. Ringing often went on to the early hours.

In local ringing circles he kept a band going at Byfield and supported Daventry branch and helped to form the Culworth branch in 1947. With his inimitable gangling unsure style he eventually broke out of Grandsire Doubles and rang Cambridge Minor, Stedman Triples and Caters with quiet guidance. If he went wrong, he spent the rest of the touch considering the reasons and was able to give a good rigmarole at the end! He was particularly proud that one of his ringers went on to become general secretary of the Llandaff and Monmouth DA and with her help we hope his tales of life and ringing in the village will be published. In the mid-1980s a new band started from scratch. Then ringing rector Revd Colin Hewitt helped Fred to achieve a life-long ambition - to rehang the six and augment to eight. He put a telling amount of effort into getting the funds and arranging voluntary labour to see a ring of eight dedicated in September 1991. His speech before two bishops on that occasion was a tour de force and long! The treble was given by Fred and older ringer Cyril Nicholls and it records the names of eight Byfield ringers. After the eight were installed, the young band dispersed and the seventh cracked. Fred set about raising the money outside the village as the PCC were raising funds for other work, but he did feel poorly supported by them at this time. The new bell proclaims ‘Remember Janet Mary Hutt 1914-1993’. The cracked seventh was used as a dumb-bell to teach Alison Buck to ring and she now takes over as tower captain supported by Simon Shepherd as steeple keeper. Fred has had several spells of being unable to climb to the belfry and last made it on 12th February.


He was a regular visitor to Badby from 1982 and records show that he rang at 696 practices! His last ring was on 24th March. Ringing or not, he much anticipated refreshment in the Windmill. For full effect, Fred always waited for full attention before speaking, in later years the pauses got so long that a snippet of Newnham scandal could be inserted. Getting him out of the Windmill was a highly developed art, delayed by running the gauntlet of the deliberately provocative locals.

A man of many parts, he has been on Jimmy Young’s radio phone in, Radio Northampton and on TV about the Elephant Man, to whom his father spoke when he stayed nearby. I can go on about Fred for ages, as can others from the choir, the British Legion, the village ... No doubt we shall. After the funeral the following quarter peal of 1,287 Grandsire Triples was rung by Bob Sinclair 1, Catherine Hayman 2, Geoff Pullin 3, Carole Pullin 4, Ken Ramsbotham 5, Murray Coleman (C) 6, Peter Alexander 7, Simon Shepherd 8.