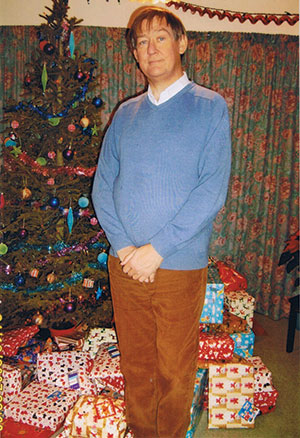 Shane Saunders was an intelligent, hardworking and very resilient man and his family are very proud of him. He was patient and calm and could always find a solution to a problem. His life was hindered by illness since he became diabetic at the age of 17 and he suffered the long-term consequences of this in recent years, becoming increasingly limited in what he could do, but he always made the best of what he had and what he could still successfully achieve. He was independent and determined right to the end. He was brave and remained optimistic no matter what life threw at him. He never made a fuss and was happy for his family to enjoy their lives even if he couldn’t always take part.

Shane grew up in Colchester with his Mum and Dad, Janet and Norman, and his brother Duncan. His cousins lived just down the road and they used to play together. He was also a Cub Scout. Being a clever boy, he went to Grammar School a year early. During school holidays he had jobs in the Army and Navy Stores and an Accountancy office. In 1972 he was offered a place at Clare College, Cambridge to read Mathematics, again a year early, and thoroughly enjoyed himself there, playing football as goalkeeper, joining a Rowing Club, cycling around the countryside and learning to ring bells at Trumpington, taught by Roger Kendrick. He liked to listen to classical music while he studied and retained his love of it. He also loved driving and his first car was a Beetle, which he drove around the country to go and watch Colchester United football club play.

After university, Shane moved to Hatfield, having got a job at British Aerospace, and started a career in IT. He joined the bellringers at Hatfield and made some great friends and had fun times. One friend recalls how three of them went out on a boat after a Barn Dance to finish a bottle of cider, and Shane ended up in the water. He was Ringing Master at Hatfield for several years and was also General Secretary of the Hertford County Association of Change-ringers for over 20 years. This involved spending many hours collating and producing Annual Reports, organising striking competitions, and attending Committee meetings, all of which he seemed to enjoy.

He met his wife, Anne, in 1979, via a mutual friend, Rob Goss. Shane and Anne were married at Thorley in 1983 and celebrated their Pearl Wedding Anniversary last year. They lived in Welwyn Garden City and had two children – Philip, born in 1993, and Natasha in 1997. The children have happy memories of Shane reading them bedtime stories, playing cricket with them in the garden, letting off fireworks, going on bike rides, playing board games, decorating the house with lights at Christmas, going on roller coasters, helping with homework, and always providing good advice.

On leaving British Aerospace, Shane worked for a while at GEC General Signal, but still met up regularly with former colleagues to play Bridge for several years afterwards. Next, he got a job at Rank Xerox, where he was to spend most of his working life. He travelled quite a bit with his job – to Japan, Vancouver, Dallas and Los Angeles. He enjoyed playing 5-a-side football and the occasional cricket match with friends from Xerox.

In 2002 Shane and his family moved to Peterborough, where Shane rang bells at the Cathedral and was Ringing Master there for a while, as well as Branch Ringing Master. He also edited the Peterborough Guild Report for several years, using skills learnt during his work on the Hertfordshire one. He was pleased to be invited to a garden party at Buckingham Palace in 2004, presumably in recognition of his services to bellringing. He rang 108 peals in total between 1978 and 2004, and over 1,000 quarter peals between 1977 and 2007.

Having a great work ethic, during a period out of work, he never gave up looking for another job. He did private maths tutoring for a while and was then lucky enough to get a job at TWI, where he was still working when he passed away, albeit on sick leave for the last few weeks.

Shane always enjoyed reading. As a child he would strain his eyes to read in bed after lights out, and as an adult was rarely to be seen without a Daily Telegraph, a New Scientist magazine, a Sudoku book or a science fiction novel to hand. He was very knowledgeable and, if you asked him a question, you could always expect a long and descriptive answer. It is the inability to ask him questions that his family will miss most about him.