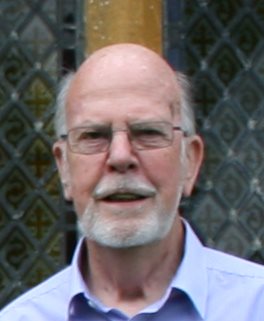 After leading the Byfield singing item at the branch carol concert on December 7, he had a stroke the following day. Since then he has suffered further heart problems from which he has been unable to recover.

Barry learned to ring after he and Pauline moved to Byfield into Fred Hutt's house. Intrigued by everyone mentioning it as "Fred's house", he decided to investigate and took up ringing in 2003. He has been successful in recruiting others to ring, and his own ringing progressed to five quarter peals with the peak of inside to Plain Bob Doubles in 2011.

Pauline died in 2014 and they had no children. Barry's sister lives in Northampton and thanks go to Jackie Bailey for her attention to, and news of, Barry in his last sad days.

Barrys' funeral took place in a full Holy Cross church on Wednesday, January 4, followed by burial in the cemetery afterwards. There was a wake in the village hall. The bells were rung open after the service and during the burial by the many ringers who were present.