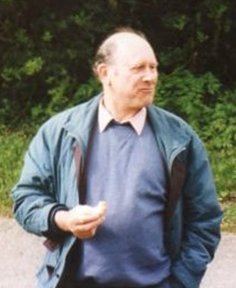 Charlie Truman, who died on May 14, 2018 at the age of 87, was for many years one of the leading ringers in the south of Northamptonshire.

He was born in Whittlebury near Towcester on December 27, 1930 and learnt to ring at St Mary's Church, Whittlebury in 1943 when the war time ringing ban ended. He was taught, with three other local youths (two sets of brothers in fact), by Albert Booth, Head Gardener at Whittlebury Lodge which has since been demolished. After national service in REME between 1949 and 1950, finishing his service as a Lance Corporal Craftsman, Group A, Class 1, he returned to the village. He married his wife for over 60 years, the late Joan, at Abthorpe Church in 1957. Their son, Paul, was born in 1961. Charlie played club cricket until the 1960's and then took up golf becoming a member of Stowe Golf Club for many years. He and Joan lived in Whittlebury until 2000 when they decided a move to somewhere with more accessible facilities might be advisable and so they settled in Towcester where they lived for the rest of their lives.

Having learnt to ring, progress was slow for a number of years until he came under the influence of William A Yates who was very active in local ringing in the early 1950's. He joined the Towcester Branch of the Peterborough Diocesan Guild under Whittlebury tower in 1958, rang his first peal, Grandsire Doubles conducted by Bill Yates at Whittlebury in 1959 and his first as conductor in 1962, Stedman Doubles at Grafton Regis.

By regular attendance at the practices at Helmdon and Wicken, which were local centres of excellence, he was able to extend his ringing to surprise minor and major, and during this period he developed an interest in spliced surprise minor. First Monday practices at Cold Higham or Pattishall initiated by Charlie and his great friend Jim Linnell, who was one of the brothers he learnt to ring with, gave him the opportunity to develop the spliced surprise minor repertoire and to call touches and peals and this culminated in a peal in 34 methods (perhaps the maximum at the time) at Pattishall in 1965 which he conducted. The augmentation of Daventry bells in 1965 to a fine ring of ten gave him the opportunity for 10 bell ringing and he also had some experience on 12 during the 1990s. His final peal total was 777 of which he conducted 76.

For many years he was tower captain at Whittlebury and from the 1990's ran the ringing at Easton Neston until he was forced to retire when his health started to deteriorate in 2010. It was fitting therefore that quarter peals in his memory were rung at both towers. Peals were also rung at Easton Neston and Bradden.

His funeral took place at Whittlebury on June 27, 2018 and he was buried in the churchyard alongside Joan, who had predeceased him by just three months, and his parents.