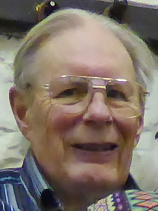 Richard Frank Waddy was born in Boughton, Northampton. His parents were both anaesthetists. He attended the local schools before going to Oakham School, where he kept a low profile. He left at the age of 17 to serve an apprenticeship with Blackwood Hodge, Northampton and obtained an HNC in mechanical engineering specialising in hydromechanics. Richard learned to ring at Harlestone.

After a brief spell running his father’s garage and agricultural contracting with his brother, Richard moved to Cummins Engine Company at Shotts near Glasgow. He spent five years there before meeting and marrying Margaret Warren; they then moved to Cummins’ new plant in Darlington, where their daughter Fiona was born. After a year they moved to Brompton-on-Swale near Richmond, where son Adrian was born. After seven years, a brief spell was spent in Rochdale before moving to Cummins at Daventry and buying a house in Long Buckby in 1975. For 10 years he was Manager of Engineering and Reliability for the Daventry Plant, travelling extensively to the USA and retired at the end of 1996.

In 1975 Long Buckby was an inactive 5-bell tower so Richard joined the Daventry team and soon became one of three with Hugh Johnson as Tower Captain and Peter Wenham, who went on to run it for forty years. They kept Daventry ringing going after the leaders of the rehanging and augmentation to a super 10, left following a dispute with the vicar. Richard was the tower correspondent almost immediately and remained secretary until March 2018, except for five years when he managed to delegate the job under his close scrutiny!

Richard joined the Guild as a member at Daventry in 1976. He was Daventry Branch Steward 1987 – 90. He was involved with the augmentation to eight at Long Buckby and was a regular supporter of the tower and pub. He also acted as Independent Examiner for the Guilsborough Branch from 1992 – 2007.

Richard was steeple keeper at Daventry for many years and kept the ten in good order. He initiated the installation of a dumb bell in the ringing room and his working parties installed ladders and handrails to make it safer to work on the top of the frame which is 15 feet above the bell chamber floor. He also initiated the overhaul of the bells by Taylors in 2015 after 50 years of heavy use and, after some scepticism, agreed to their recommendation of fitting a wooden-shafted tenor clapper. Tower Captain Hugh Johnson was unable to get up to the ringing room by the end of 2012 and Richard deputised and then took over. Unfortunately Richard’s increasing illness prevented him ringing since July 2018.
Richard rang 615 quarter peals: the first was Plain Bob Minor at St Chad’s, Rochdale on August 24, 1975 as abon voyage to Daventry and his last at Long Buckby on January 21, 2018. He was a keen member of the Thursday night Woburn quarter peal team, where the majority were of Major but his list featured Royal, Caters, Minor and Doubles at Daventry, Weedon, Long Buckby and St Anne’s where his daughter Fiona lived.
He became a keen member of Mike Chester’s peal team, for which he was the organiser for several years. He rang 251 peals which included eight in the USA and one on Lundy Island and 121 were with Mike. His peals were rung in 75 different towers including 58 at Daventry. His first peal was treble to 42 doubles methods on April 28, 1979 at Upper Boddington and the last was Yorkshire at Ambrosden on March 10, 2012.
During his retirement he designed and fitted out a canal boat, enjoying many happy and long holidays with his family. He also meticulously restored a Field-Marshall tractor that had been delivered to his father’s farm on December 23, 1950, and enjoyed taking it to various country and steam shows.

There was a well-attended celebration of Richard’s life at Long Buckby Church led by the Team Rector of Daventry on Friday, November 23 followed by a wake at the Rugby Club.