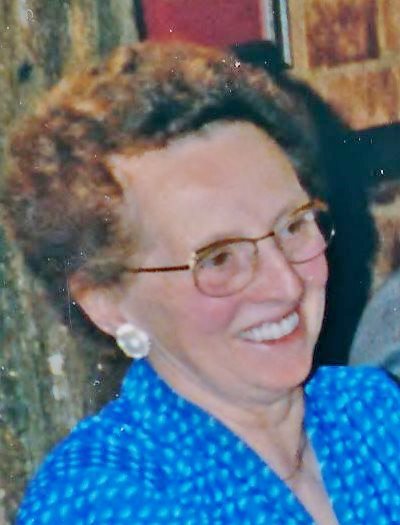 Iris Rosina Dorothy was born in Basingstoke and became qualified in book-keeping and business administration. She learned to ring and met Stan. They were married in 1950. Dot was born in Basingstoke and the family moved to Staverton, Northamptonshire in 1952 where Penny, John and David were born. In 1974 they moved to Oakham Lane where Iris set up the Post Office in the hallway.

Iris was a great support to the church, became a church warden and was known as the raffle queen! She was Secretary of the Daventry Branch from 1968 until 1985 (excluding 1981) and rang several peals and quarter peals. Staverton has a very handy ring of six established in 1938 by the Revd. Everard and Mollie Powell who also wrote The Ringers’ Handbook. Practices were well attended and became a local centre of ringing. The four Webb children were of course required to ring but lapsed over the years.

Iris was a founder member of the Northampton and District (now South Midlands) section of the Ladies Guild and Vice-President in 1977-8 and enjoyed their ringing holidays.

Iris taught school children to ring handbells. Iris, Stan and John Townley were founder members of the HRGB in 1968 and registered as team 43. When Sue joined the team, they could ring 16 bells, four in hand. Iris had some new handbells in the 1970s which had to be rung wearing white gloves. When performing at Turner’s Musical Merry-Go-Round, Stan sadly died on stage.

Iris took over as tower captain until February 2006, when her dementia was so severe that she was moved to Kilsby House care home.

There was a private cremation in March and her ashes were buried with Stan’s in Staverton churchyard after a celebration of her life held on April 27. Before this service all four offspring rang rounds together (Dot’s first ring since 1966) with John and Sue Townley, who later rang a tribute tune four-in-hand. The well-attended service was led by the vicar, the Revd. Roy Kilford, assisted by the Revd. Liz Cowley, who Iris helped to induct in 2002.