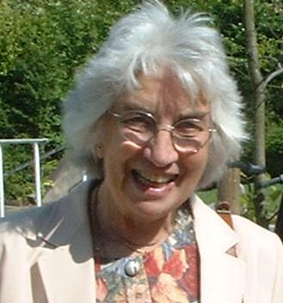 Freda was the youngest of three children born in King’s Lynn to Sydney and Mildred Greaves. She attended King’s Lynn High School for Girls and was an active member at St Margaret’s church, where she was taught to ring by Norman Harding and went on to be Tower Captain. Having married in 1961 and moved to the Norwich area, she had two children, Ian and Alison, before moving to Essex and on to Rushden, Northamptonshire, where Freda lived until 2007 when she moved to Kilsby House Residential Home.

Her secretarial skills stood her in good stead – initially working in banking, then the chemical industry, and various local government establishments. She even made page 3 of the Daily Mirror while working at Dow Chemicals when they reported that her company bought her silk underwear from America (when post-war rationing still affected availability) – actually it was nothing more sordid that being a necessity so she did not cause a spark in the chemical factory! She enjoyed many activities and was a member of flower arranging clubs, Townswomen’s Guild and the National Federation of Women’s Institutes. On retiring early, she found time for watercolour painting, lace making and needlecrafts, and for tending her extensive garden.

But throughout her life, bellringing featured prominently. She taught both Ian and Alison to ring at an early age and encouraged them at every opportunity – she never thought twice about driving them around the country for Open Days, outings, to peals and quarter peals. She rang 97 peals and many, many more quarter peals, her last being on a ringing trip in the Rutland area in 2003.

Freda held office in several Guilds and Associations (both in branch and executive committees); in particular, she was National President of the Ladies’ Guild twice – still the only person to do so in the Guild’s 104 year history. She was among a group of ringers who raised funds for Peterborough Cathedral bells and subsequently was a founding member of the Cathedral Company of Ringers in 1986.

Even when she had moved to Kilsby as her illness progressed, she continued to make friends and Ian and Alison thank Tracy especially for her friendship, and to her and the team at Kilsby for the care they have provided throughout Freda’s journey. Freda’s funeral took place at St Faith’s church, Kilsby on 15 January 2016, where the sunshine shone through the windows on her throughout. Around 40 friends joined Ian & Alison for the service taken by the Rector of Nether Heyford before the family went to the crematorium.

Several QPs and two peals were rung in her memory – the peal at Earls Barton (RW 5472, Page 252) was a new method named “Freda Surprise Major” as a mark of respect.