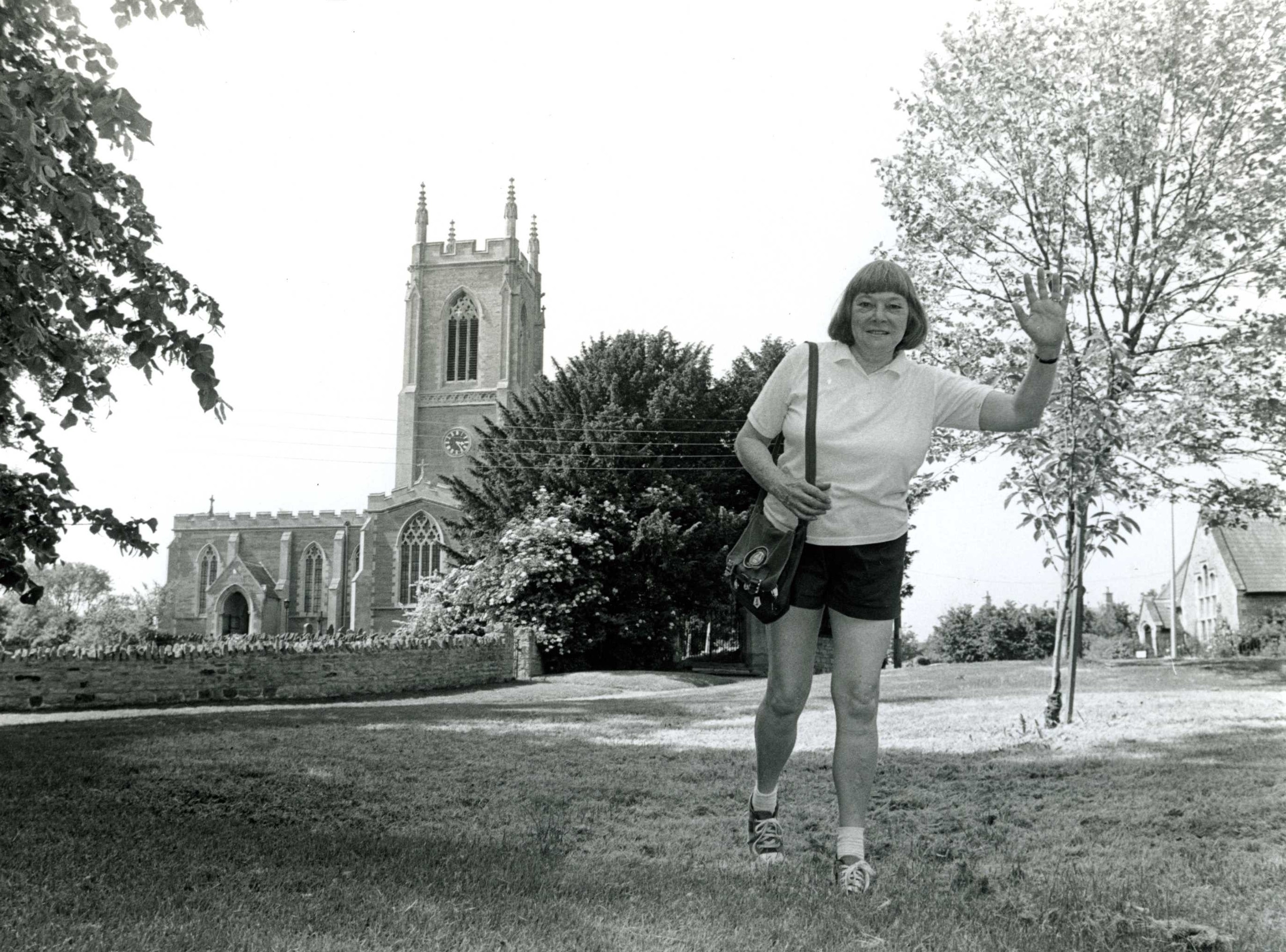 On 6th July 2020 Audrie celebrated her 90th birthday at Duke’s Court Care Home in Wellingborough where she had been a resident since August 2018. Six weeks later Audrie went into acute kidney failure and within a week had passed away on 4th September 2020. God-given co-incidences meant that Audrie’s end of life spiritual care was met as she wanted, with the last rites being administered by the Revd Christine Ostler who had been curate at Orlingbury over 20 years earlier and who remembered the times when Audrie invited her for tea and a chat in the kitchen at Dairy Cottage. We had not been in touch with Christine for many years, but she was also able to officiate for Audrie’s funeral at the Nene Valley Crematorium.

That was a moving and wonderful send-off in terms of music, scripture, tribute and prayers, even though, due to Covid times, the 30 guests were masked and there was no singing of hymns – and nor were the bells ringing for someone who had been a committed bell ringer for over 60 years.

Audrie Read learned to ring at St John’s, Old Coulsdon in 1950. We are not sure who taught Audrie to ring, but two years on, she was obviously a competent ringer, as on 15th June 1952 at St Michael, Betchworth, Surrey, when ringing for a confirmation service, Audrie was introduced to Capt. Edward Samson by the legendary Pat Cannon. I remember my mother telling me that when she saw Edward, she “knew that this was the man I’m going to marry”. On 1st August 1953 they were married at St John’s, Old Coulsdon, Audrie’s own tower, and bride and groom came out of the church to a handbell guard of honour. Together Audrie and Edward rang regularly at St Peter’s Bournemouth and Lady St Mary, Wareham.

Army life, however, kept them on the move, and from Wareham to Dumfries, Scotland, in 1954 where Veronica was born, and then moving to Germany in 1955, where Christopher was born. They resumed ringing again in Dorset in 1958 when stationed at Bovington Camp, where Jeremy was born. In 1959 when Edward retired from the army, the family moved to Wellingborough and Edward worked for the Peterborough Diocese as stewardship advisor. Audrie had David and then Timothy.
Ringing was a regular part of church life at All Hallows and once the children were old enough, on Thursday practice nights we would go and watch the grownups ring and again on Sunday mornings.

Audrie was a loyal and committed bellringer especially once her children were teenagers. Ringing was the family activity that we all shared as soon as we were old enough to learn, except for David, who joined the family band later after Audrie, Edward, David and Tim moved to Orlingbury near Kettering in 1980.

Many ringers in the Wellingborough Branch of the Peterborough Diocesan Guild of Change Ringers will remember ringing with Audrie. In her obituary note for the PDGCR website, Jenny Ball, secretary of the Wellingborough Branch, recalled Audrie as “a dedicated and much loved ringer for over 50 years in the Wellingborough Branch, ringing well into her 80s at Orlingbury”. Jenny described ringing several quarter peals with Audrie, often on Branch Quarter Peal Day, with Audrie on the treble and recalling that “she rarely put a foot wrong, you could guarantee she would be in the right place”.
Audrie did not progress much beyond plain methods and was happiest when ringing doubles and minor. She rang 4 peals, the first was Plain Bob Minor on the 3rd at Lytchett Matravers on 23 April 1960 conducted by William C Shute. There was a gap of nearly 36 years between her first and second peals, which she was proud of and thought might be a record, but we are not sure that it is. Her next 3 peals were at Orlingbury, all in 1996 on the treble, the last being on 28 December.

Audrie always enjoyed cycling and walking and for over 25 years walked the annual Waendel Walk of 17 miles to raise funds for the church and bells at Orlingbury. The photograph accompanying this tribute is of Audrie in 1993 setting off on the walk with Orlingbury church in the background. The 4th bell at Orlingbury was recast with an inscription to the memory of her older sister Vivienne Clode along with retuning the complete ring in 2000.

The last family quarter rung by Audrie’s five children and her son-in-law was on 10th July 2010 for her 80th birthday. We are looking forward very much to ringing a family quarter peal again, with the band comprising Audrie’s five children and her son-in-law Graham, hopefully on 6th July 2021 at Orlingbury, which would have been her 91st birthday, for a service with interment of her ashes in the same place as the ashes of her husband, Edward, in 1994. Graham notes Audrie’s magnificent legacy to bellringing is in the shape of her five children, all of whom are active ringers.