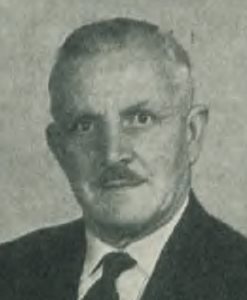 John (Jack) Henry James Bluff was born in Stamford in 1906. He learned to ring at All Saints in 1919. On December 8, 1927 he conducted a quarter peal of Grandsire Doubles which was the longest recorded length on the bells, and the first quarter-peal by all the band, which included his uncle James Bluff. It was followed on December 24 by the first peal on the bells and for all of the band.

Jack, as he was known to all his friends, rang many six-bell peals in Rutland and north Northamptonshire with several in earlier years being the first peal on the bells or on restored bells. He rang his first 8-bell peals in 1932. It was not until 1934 that he rang a peal for this Guild, hitherto they had been for the Lincoln Guild and the Midland Counties Association. He rang about six a year until World War II. After the war, he returned to peal ringing and rang 7,008 Plain Bob Major at Loughborough Bell Foundry on December 6, 1952, conducted by Ernest Morris and he conducted 7 Surprise Minor at his home tower on June 19, 1961 for a visit by the Queen to Stamford. His last peal was of doubles at Thornaugh on July 7, 1974 for the Guild’s golden jubilee. In total he rang 214 peals of which he conducted 119.

He taught many youngsters to ring and was a very patient teacher. He was captain at All Saints,

Stamford for many years and later supported St John’s Peterborough. He travelled many miles in pursuit of ringing and rang peals in towers throughout the country. He was elected a member of the Ancient Society of College Youths in 1962.

He was Master of the Guild from 1966 until 1970. He was elected a Life Honorary Member in 1971. He represented the Guild on the Central Council from 1965, when the Council met in Northampton, until 1972 and attended seven meetings. He had a heart attack in 1977 but kept ringing so long as he could climb the tower stairs.

Jack died in Stamford Hospital on August 2, 1979 aged 74. The funeral service was conducted by the vicar of All Saints and the Revd E E Orland, President of the Guild.