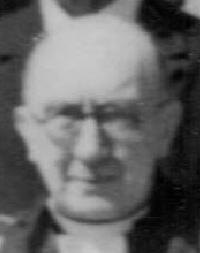 The Venerable C John Grimes, Archdeacon of Northampton, was President of the Guild from 1943 to 1956, following the Dean of Peterborough.

John Grimes, priest, doctor and engineer, was one of those enbued with wisdom from on high, and every day of his long and adventurous life was manifestly ordered by God's good governance.

He was born at Stratford on Avon on the Feast of the Epiphany, 1881. He trained as a civil engineer, and was resident engineer in Devonport Dockyard in the early years of Edward VII; then he was engineer to Calcutta Port Commissioners; and in between he had helped build the Great Central Railway through Brackley. The only shadow of disappointment ever seen to cross his face was when British Rail took up the track he had laid.

From Calcutta he came to Ripon College Cuddesdon and was ordained to the priesthood at the hands of Bishop Charles Gore. He had a brief curacy in Reading, then he went back to Bengal as a chaplain with the Indian Ecclesiastical Establishment from 1915 to 1924, and in the Great War to Mesopotamia as assistant director of military works. He was Vicar of St Matthew, Westminster, 1924 -1925, and then back to Calcutta as Archdeacon until 1933.

Whatever he put his mind and hand to came to order: bridges, churches, constitutional schemes, ecclesiastical organization, and the minds of men. He was exact, lucid, incisive, and never wasted a word or an hour of his own or of anyone else's life. Bishop Claude Blagden got him to St John’s Peterborough as Vicar until 1938, then rector of Thorpe Malsor and after an interlude, in 1941 made him Archdeacon of Northampton until 1959 and canon residentiary.

John Grimes spent the interlude writing the thesis on the Indian Church which earned him his Lambeth DD. No one in the Canterbury Convocation during the Fisher regime can forget the upright, dapper figure of the prolocutor in his DD robe. Those years the Convocation consumed in revising canon law, John applied his precise mind to the task, and wondered afterwards to what effect had all that labour been. So did many of us.

But in his archdeaconry none of his labour was in vain. He knew every priest, every warden, and they knew they were known; and this was strength and comfort to the well-doers, and salutary to the slothful. He and his Bentley modified many a curve in Northampton lanes, and between him and the gateposts there was little hid that was not made manifest.

He was, I suppose, the greatest indirect benefactor Peterborough Cathedral and diocese have known for 400 years, and Northampton High School can never be unmindful of his love and care. In his last years he would read more in a week than many a curate reads in a year. Alert and lively up to his last hour, he died as he prayed he would, at home, in the presence of his beloved wife and a fellow priest on November 19, 1976. Yes, we rejoice and give thanks for this remarkable man, who could have done anything he set his mind to, and gave his whole heart and will to the Lord who called him to be his priest.