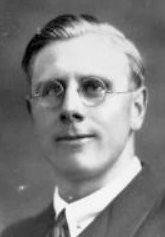 With deep regret we record the death on October 31 at the age of 58, of George Wilfrid Jeffs, General Secretary and Treasurer of the Peterborough Diocesan Guild since 1952. Before that date he had been for several years secretary of the Thrapston Branch and had represented the Guild on the Central Council from 1945 until his death. George was a chorister at Tichmarsh for 50 years, and had been for some time chairman of the Thrapston Branch of CEMS. He was a very capable ringer and enjoyed an occasional peal, particularly on the fine eight of his beloved Tichmarsh, the church to which he was devoted and had served all his life.

His first peal was Grandsire Triples at Tichmarsh on September 16, 1922. His peal total is not to hand but is believed to have been in the region of 100, including the first of spliced treble bob major for the Norwich DA at Salle and many of which he conducted. The last quarter peal that he rang was half-muffled at Woodford on February 14, 1961.

George married Miss Baxter at Tichmarsh on December 3, 1935. They resided at Tichmarsh until their house was destroyed by incendiary bombs during the last war, when they moved to Thrapston. George was employed as a forester on the Lilford Estate for many years, and latterly as a carpenter for a Thrapston firm.

During the period that he has been Secretary, the Guild saw several changes and new undertakings, including the beginning of the very popular summer festival and the week-end course. He handled the affairs of this large, mainly rural Guild with characteristic competence and diplomacy and endeared himself to all.

The funeral took place at Tichmarsh on November 4 in the presence of a large congregation, which included many members of the Guild and representatives of the Ely and Lincoln Diocesan Guilds. The service was conducted by Canon Luckock (Rector of Tichmarsh), assisted by Canon G F Turner (Guild President) and the Revds. J Dakin and C J W Faulkner. A course of Grandsire Triples was rung on handbells around the coffin after the Blessing, and the half-muffled bells were rung as the cortege left the church for Kettering Crematorium, where several other ringing friends were able to pay their last respects. Several memorial quarter and full peals were rung in subsequent days.