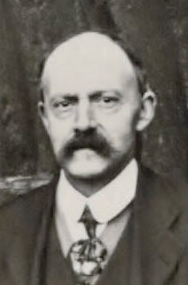 Thomas Law was born in Weston Favell in 1868 and lived there for most of his life, moving to Overstone in his last year or so.

He learned to ring in 1887 on the village’s five bells. His first peal was reported in Bell News, turning the tenor in to Grandsire Doubles on the nearby five at Wootton on August 24, 1907 for the Central Northamptonshire Association (CNA). He rang just over 100 peals, all for the CNA, and then from 1924 for this Guild and several jointly with the Towcester & District Association.

Although much of the ringing was Grandsire, Thomas got about in and around Northampton and was ringing Plain Bob and Kent Treble Bob Minor in 1908. On Whit-Sunday 1908, after the special service for the benediction of Weston Favell bells, which had been quarter-turned and provided with all new fittings by Bowell, he conducted several long touches of Grandsire Doubles with W Law on the treble (probably his son).

In 1911 he was elected a member of the Towcester & District Association before ringing in the first peal on the all-new Gillett & Johnston eight at Easton Neston, Grandsire Triples on the tenor. He later attended the dedication of a peal board on Palm Sunday 1909 for this coronation peal.

In 1913 he took part in a bicycle ringing outing. The party left Northampton at 5am and rang at seven towers on the way to Aynho and back with lunch and tea arranged at vicarages. The cycling alone would have occupied at least five hours! In April 1914 he rang at the rededication of Rothersthorpe bells. In June 1914 a peal of Grandsire Doubles at Weston Favell had three first pealers including William T Law, and Thomas conducted a 720 of Grandsire Doubles in September as a farewell to William (aged 18), who joined Lord Kitchener's army on the following day.

In August 1914 Thomas rang a peal of six minor methods at Greens Norton which celebrated his eldest daughter’s birthday. In 1915 there were Ringing World reports of Tom and other Northampton ringers joining local ringers to ring long touches or quarter peals before services at Easton Neston, Southam, Daventry (first quarter on the anti-clockwise eight) and St Peters.

Tom was elected Secretary for CNA Northampton District in 1915, a post that he held until the 1920 AGM and gave his address as St Peter's Cottages, Weston Favell. He is reported at the CNA Wellingborough District meeting in August. At the District AGM in 1921, Thomas was elected as a committee member when seven new members joined from Pitsford, who he was teaching.

Although 1916 was a gloomy year with too many causes for half-muffled ringing, much travel continued. Thomas visited Easton Neston (for the vicar’s funeral), Weston Favell, Ecton, and Daventry (all as farewells to ringers joining the army), Olney (quarter peal of Stedman Triples), Brixworth (for the District AGM), Kettering (for District quarterly meeting), Newnham (720 of Bob Minor with the tenor man hidden behind the clock case) and Towcester (75th birthday celebrations for James Slarke, but Thomas is not included in the list of those who rendered songs!).

Thomas also found time to compose and publish a new surprise major method in The Ringing World similar in construction to Bristol. It was later first rung to a peal at Osbaldtwistle and named Lancashire, but had to be renamed (Northampton) because Lancashire had already been used.

In 1917, Thomas rang quarter peals including Double Norwich and Superlative Surprise Major. He conducted a 720 at Weston Favell with Lily Law on the treble to celebrate William’s 21st birthday. Thomas rang handbells over the grave of James Slarke at Towcester and for ringers killed in action at Ecton and Moulton.

In 1918 Thomas rang quarter peals of Superlative at All Saints, Stedman Triples at St Edmunds and 576 of London Surprise Major at All Saints, all for services. He attended the funeral in Daventry of Arthur Andrews but owing to the large amount of sickness, and the number of deaths in the parish, no ringing could be done on the tower bells. However in 1919 he rang in the first peal at Daventry that is still recorded on a peal board erected to the memory of Arthur Andrews.

With the creation of this Guild in January 1924, Thomas took part in the first peal for the Guild at Desborough on February 9 and appears in a photo with the peal board in September. The peal was Plain Bob Major and a footnote in The Ringing World noted that five of the ringers came from 5-bell towers.

He was elected a Guild representative to the CCCBR for 1930 -2. His mentions in The Ringing World decline steeply, with mentions being a quarter peal of Bob Royal for service at St Giles, ringing in the opening touch on the rehung six at Moulton in 1931, a quarter peal of Stedman Caters at St Giles for service in 1932 and in November 1934 a peal of Stedman at Wicken which was a 66th birthday compliment for him. In 1935 he is still referred to as Foreman at Weston Favell, but by 1939 is listed as an unattached member from Overstone.

His 100th peal is recorded as Stedman Triples on October 23, 1937 at St Peter's. In July 1939 he rang in the 200th anniversary peal at St Peter's of the Benjamin Annabel peal. I can trace no notice of his death or funeral in 1940, but the CCCBR records him as buried at Overstone.