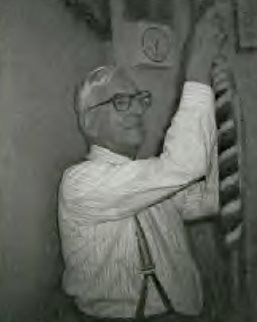 Burley Potter Morris was taught to ring at Warkton, Northants in 1926 and was a ringer there until 1957. He represented the Peterborough Diocesan Guild on the Central Council from 1951 - 1953 and attended 2 meetings. He was Master of the Guild 1955-1957, when Burley moved to Derbyshire to become Postmaster of Ashbourne. He then rang at Darley Dale, and was made Hon. General Secretary of the Derbyshire Diocesan Association.

Burley was a founder member of the Post Office Guild of Bellringers. Whilst at Ashbourne, he was awarded a special GPO commendation for fighting off an armed raider. During the Second World War, he was in the army, posted to somewhere near Barnet and involved in top-secret work which he still could not talk about. He featured in the Ringing World article ‘Servants of the Exercise’ No 43 (RW 21.10.1960).

The one thing that Burley loved most in ringing was a peal, he rang a total of 1076. His first was at Warkton on 4th August 1928, and he travelled far and wide. Some of interest were: Stedman Triples at Stayning, Sussex 15th May 1934 Cond. Keith Hart, Cambridge S Major St Mary, Staines 15th November 1934 Cond. George Pye, Stedman Caters St Magnus the Martyr, London 23rd November 1935 Cond. Charles Coles (with James George on the 9th aged 82), Stedman Cinques Leicester Cath. 30th March 1940 Cond. H. J. Poole, Bristol S Major, Barnet 14th October 1944 Cond. H. G. Cashmore etc etc his total by his 65th birthday was 410. He celebrated 60 years membership of the Peterborough Guild the day after his 75th birthday with a peal of Yorkshire Surprise Royal at Sapcote. He repeated this on his 80th birthday by when he had rung 764. His sights were then set on 1000, and with Brian Warwick’s peal factory behind him he achieved this mile-stone on 16th October 1995, Yorkshire S Royal at Sapcote Cond. B. G. Warwick (where he rang 106). He rang 312 after his 80th birthday which included 77 in 1994 and 75 in 1995! His last peal was Yorkshire S Royal at Sapcote 23rd August 1997 Cond. M. Angrave a peal he set his heart on, which was for Mary and his Golden Wedding and although not being well his ringing was very creditable. Chris Stephenson, who also learned to ring at Warkton rang in this last peal and the 75th and 80th birthday peals, which were both conducted by Murray Coleman. The following week Burley and Mary entertained 70 friends (many ringers) to a celebratory lunch.

Burley’s last quarter was at Sapcote for Princess Diana, a lovely majestic half-muffled Cambridge S Major which took 47 minutes. He came to practice the following Tuesday, and his last ring was a course of Rutland S Major. We had to help him down the stairs; eight days later he had lost the use of his legs and was admitted to hospital where cancer of the spine was diagnosed.


The Funeral took place at St Mary’s, Broughton Astley on 1st December. Burley was a very high church man and worshipped here rather than Sapcote. The Sapcote ringers rang a quarter before the service, and rang him into the church with a little touch of 40 changes. The service was conducted by the Rev Peter Burrows assisted by Revd Nicola Hunt. Incense were well swung. ‘The Lord’s my shepherd’ (Crimond), ‘The day Thou gavest’, and ‘The King of love my shepherd is’ were sung heartily by the large congregation which included many ringers. Peter’s address of Burley’s 85 years was very inspiring. As the cortege left the church the Sapcote ringers said farewell with a course of Double Norwich, and when I said THAT IS ALL it seemed very poignant. His ashes were laid in Sapcote Cemetery within the sound of Sapcote bells.

There were many peals and quarter peals rung in tribute and the Northants Midweek Group observed a short silence at its Burton Latimer meeting in December, in memory of Burley, who came occasionally to the meetings and was well-known to most of those present. Burley’s copies of the PDG Annual Reports 1951-86 were bound for the Kettering Branch library to follow on from R G Black's donation of 1924-50.