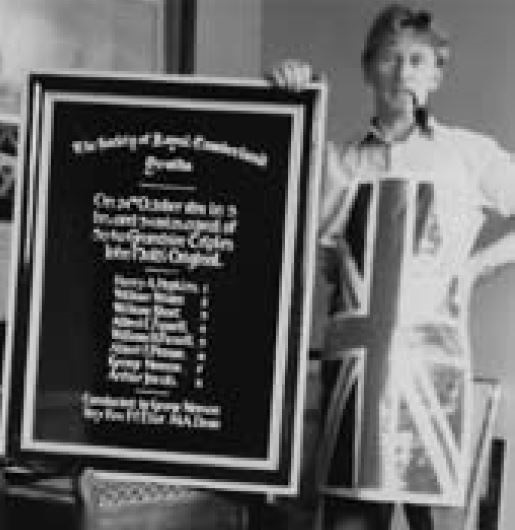 Jim and his wife Jenny moved to Kettering around 1971. He was soon tower captain and served for twenty years. He was a member of Kettering Branch from 1971 - 2002; on the Branch Committee 1972-82 including GMC Representative and Branch Chairman from 1974-9. He was Guild Steward 1973 to 1978. He was a member of the Society of Royal Cumberland Youths for over 50 years.

Jim entered his first belfry, St. Michael’s, Workington, aged about fifteen, and was immediately hooked. Little did the then Rector realise at the time, when he invited a group of youth club members to learn to ring the bells, that he was giving some of them a lifetime of enjoyment. The bells of St. Michael’s church had been silent since the wartime ban came into force, and the pre-war ringers were too old to start again. The teenagers were taught to handle by the long serving tower captain Mr A J Sanderson, but were then left to their own devices. Jimmy, being a little older than the rest was elected their leader, and soon started them on the process of learning the art of change ringing. Jim rarely missed Sunday service ringing, and every Christmas and New Year’s Eve would find him in the ringing chamber on the end of a rope. Under Jimmy’s leadership they built up a small repertoire of doubles methods for service ringing, and rang a few quarter peals for service. On one very proud occasion they rang to celebrate the coronation of Queen Elizabeth.

Jim met his wife Jennifer in the belfry in 1954 and they were married at Egremont in 1957. He went on to pass his enthusiasm to their children, Jonathan, David, and Jane. He was a very special father, and a loving grandfather to Maria and Rebecca. Besides his family, the two most important things in his life were his work and his ringing.

He started work with Workington Town Council and made rapid progress in his chosen profession to qualify in civil, municipal, and highways engineering. He served in various local government offices, in, Wales, Scotland, and England, before finally joining his beloved Planning Inspectorate in 1969.

Despite suffering a few critical comments about the unsuitability of wearing a cardigan in the office and about cockiness, he rose steadily through the ranks, finally reaching the dizzy heights of Deputy Chief Planning Inspector. He had a famous maxim for training new inspectors: keep it simple, and always read the words.

Jim was a meticulous man, paying strict attention to detail. He kept files on everything from sundries to sundials. His information gathering was done in such a way, that he quickly had you in stitches.

As the tower captain at Kettering, Jim taught countless students the noble art of campanology. In 1978 disaster struck when the 8th bell, one of the only two Eayre bells cast in Kettering remaining in the tower, cracked beyond repair. Jim’s drive and enthusiasm saw sufficient money raised to recast the 8th and also provide two new trebles to make the first ring of 12 in the Diocese. Sadly, the late 70s was not a good time to raise large sums of money for bell restoration and some people wished that a more thorough restoration of Kettering bells had been possible! It is ironic, therefore, that it was the cracking once more in 2001 of the recast 10th of the 12 that led to the whole ring being replaced by the new Whitechapel 12 in 2004.

The revision of the management structure of the Guild, created the new post of Guild Steward. The remit for the post included organising regular inspection of as many of the rings in the Diocese as feasible, initiating regular maintenance and repair where there were no local ringers, teaching maintenance and repair techniques. With his engineering background Jim was an ideal choice and held the office from 1973 – 1978 office.

Another of Jim’s talents was calligraphy, and some of his work is displayed in the ringing chamber of Kettering Church. A particularly fine example of his work commemorates a historic peal in Her Majesty’s Free Chapel of St. George in Windsor Castle.

Jim and Jenifer returned to Cumbria in 2002 where Jim endeared himself to all the Whitehaven ringers, both experienced and new learners. He rang many quarter peals including one at Workington fifty years after the previous one rung for the Queen's Coronation. Everyone will miss Jimmy with his humour and his willingness to help.