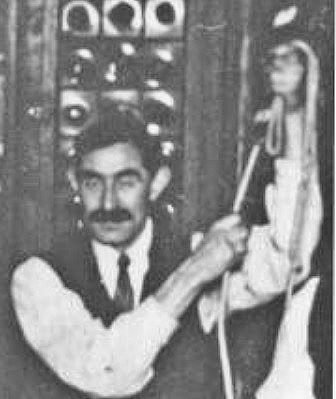 The Kettering band and the Peterborough Guild have sustained another loss by the lamented death of Mr D J Nichols, which took place at his home 3 York Road, Kettering, on Friday, May 24, at the early age of 48 years. Mr. Nichols was one of the best-known and most accomplished ringers and conductors among the Guild members.

In 1899 he learned to ring with the Kettering band, of which he was leader for some years until unable to carry on owing to ill-health. He was a man of fine character, and a splendid disposition, whose place will be hard to fill. The work of the Guild was very dear to him. He was specially gifted in teaching young ringers, and many in his locality owe what they know of the art and of conducting to Mr. Nichols' able tuition.

When ill-health kept him from climbing the belfry stairs, he always made welcome at his home any ringers, young or old, who called to see him, and several have, during that time, learned many things of benefit to them on ringing matters.

Mr. Nichols served on the Central Council of Church Bellringers from 1912 to 1926, and was elected General Hon. Secretary of the Central Northants Association in 1920, which position he held up to the formation of the Peterborough Diocesan Guild in 1924. He took an active part as the acting secretary in the reorganisation, and was duly elected the first General Secretary of the new Guild on January 5, 1924. He convened the meeting in 1925 which inaugurated the new Daventry Branch. He served in the R FA on the Western Front during the war, and his war services had ill effects on his health, and was practically an invalid for the last five or more years. He had to resign as Secretary early in 1926 owing to ill-health.

All his peals, 124 in number, were rung for the Central Northants Association, of which he conducted 80. His first peal was Plain Bob Minor rung at Rushton on June 25, 1903. The peals ranged from doubles, through multi-minor, Surprise Major to Stedman Caters and of the total, 42 were on handbells, of which he conducted 23. Mr. Nichols was writing a history of the bells and ringers of Kettering, and the peals which have been rung there, but this is unfinished.

The funeral took place at Kettering Cemetery on Monday, May 27. The first portion of the service being conducted by the Revd S M Morris, assisted by Mr. F. Wilford (Master of the Guild), who read the lesson, in the Church of SS Peter and Paul. As the cortege approached the church, the bells were chimed by his fellow ringers. In addition to the family mourners, a large number of' ringers met to pay a last tribute of respect to a departed friend, and amongst these were Revd R C Thursfield, JP (President Kettering Branch), Revd L H Lethbridge; Revd E J Atkins, Mr F Wilford (Guild Master), Mrs Wilford, Miss Thursfield and Miss Hepburn (Ladies' Guild), Messrs W T Wilson (Treasurer), R G Black (General Secretary), F Barber and H Baxter (branch secretaries), A E York, W Perkins, T R Hensher, A Tompkins, S J Lawrence, W Lawrence, A Bellamy, A Smart, C Moore, B Morris and the Kettering ringers.

After the committal sentences, a course of Grandsire Triples was rung over the grave by Messrs A V Inns 1-2, R G Black 3-4, E Chapman 5-6, A Henman 7-8

The bells of the Church of SS Peter and Paul were rung half-muffled in the afternoon and evening to touches of Grandsire and Stedman Triples and the ‘whole pull and stand' 48 times by Messrs W Perkins, A Henman, A E Payne, R F Turner, C W Bird, R G Black, T R Hensher, and A V Inns.