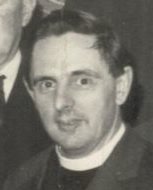 Ernie Orland faced his death with the confidence of the faith he had so earnestly espoused throughout his life and lovingly conveyed to others for most of it. We extend our sympathy to Janet, who ably supported Ernie in his ministry, and to their children, Andrew and Catherine.

Last November, Ernie proudly collected his certificate recording his fifty-year membership of the College Youths. Indeed, as a former President of The Peterborough Diocesan Guild of Church Bell Ringers and of The Guild of Clerical Ringers, he had much of which to be proud.

Ernest George Orland was born in the village of Long Buckby, Northamptonshire in February 1928. His father was the village grocer, noted for his tidy shop, clean white apron and bowler hat. Ernie attended the village school and eventually gained a scholarship to Daventry Grammar School. Being a member of the church choir and deeply involved in church life, he graduated to the belfry, where he quickly showed good promise and began his life-long interest in change-ringing and ‘tower grabbing’. Bicycle was his means of transport and soon he had ‘ticked off’ all the ringable towers within cycling range.

On leaving school, Ernie served an apprenticeship with British Thomson Houston in Rugby, eventually becoming a draughtsman. He never lost his skill at the drawing board and even in retirement helped the diocesan office out by producing drawings for them.

Ernie’s involvement with the Church was no peripheral matter. He soon developed a deep faith and felt a clear call to the ministry, which initially led to training as a Reader. In 1961, Ernie began full-time training for the ordained ministry at Lichfield Theological College and was ordained Deacon in 1962, becoming curate at St Michael & All Angels, Northampton. He was ordained to the priesthood in 1963. From 1965 to 1969, Ernie served as Rector in the country benefice of Gayton with Tiffield, again in the Peterborough Diocese. His great challenge came in 1969 when he moved to the demanding parish of SS Peter & Andrew, Corby. Ernie was later appointed as Team Rector of the expanded Corby ministry and Rural Dean of Corby. His well rewarded efforts were recognised by his appointment as an Honorary Canon of Peterborough Cathedral in 1979. In 1981, Ernie moved to the parish of All Saints Peterborough from which appointment he retired in 1993. All Saints, at the Northern end of the old Peterborough, had a strong musical tradition in which Ernie became deeply involved; even in retirement, he frequently returned to his old parish to join in musical celebrations of church festivals.

The transfer of the ten bells from St John’s, Leicester and their augmentation to twelve to provide a new and fitting peal for Peterborough Cathedral, received Ernie’s full support. He was delighted to take part in the first peal on the new installation, Grandsire Cinques. In retirement Ernie became a most valued and regular member of the Cathedral Sunday service band, ringing a great many quarter peals on the bells for Sunday Evensong. Ernie served as librarian for the Cathedral Company; in that capacity, he maintained accurate records of the band’s achievements, in addition to the performances of visiting bands.

In retirement, Ernie and Janet lived in the Lincolnshire village of Market Deeping, to the North of the Peterborough conurbation. They both played a full part in village life, particularly in their support of the local bowls team, a sport in which they both became highly proficient. The augmentation of Market Deeping bells to eight gave Ernie the impetus to assist in the training of new ringers. Matthew Hardy, Philip Earis and the Stokoes and many others, owe much to Ernie’s careful tuition and dedication in introducing them to ringing at Peterborough Cathedral and to Ernie’s ready will in transporting them, to meetings and practices.

Ernie was also a keen cricketer; when he felt he could no longer grace the pitch, he took to scoring, and was in demand for the inter-diocesan cricket tournament.

Always a keen supporter of The Clerical Guild of Ringers, Ernie was a regular member of the group which assembled in ‘Low Week’ for the annual tour. He proved to be an excellent President of the Guild, chairing its meetings with both tact and skill. Ernie rang in many peals for the Guild, including the first of Stedman Cinques, London Surprise Major and Spliced Surprise Major by the Guild.

A firm friend, a valued pastor and a wise counsellor, Ernie will be very much missed by many.