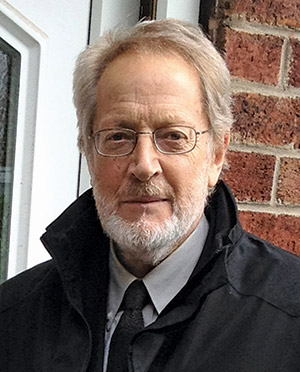 Denis was born to Linda and Harold Pearson on 5th October 1940 in Finedon, Northamptonshire. At Finedon church his older brother Noel taught a teenage Denis to ring starting his lifelong passion for bell ringing.

Denis attended Wellingborough Grammar School moving on at the end of the 1950s to the School of Architecture at the University of Sheffield. As well as gaining a grounding in architecture that was to set a foundation for a long career, he also spent time indulging in his love of music; at one time getting to see his jazz hero Thelonious Monk play live in Sheffield.

Denis continued his ringing whilst at university, joining the then recently formed Sheffield Universities’ Guild of Change Ringers (SUGCR) with whom he rang his, and the Guild’s, first peal in February 1960. Years later he returned to join in with the SUGCR’s 40th and 50th anniversary celebrations, and in 2000 conducted a 40th anniversary peal of the “first peal” along with three others of the original band.

On graduating he spent several years working for a number of development corporations taking him from Corby to Washington in the North East, back down to Northampton and Milton Keynes. In the mid-70s he jointly setup a long-standing architectural and surveying practice based in Wellingborough.

Denis’s family had settled in Cogenhoe, Northamptonshire where he got fully involved in the local church community soon becoming Tower Captain; a post he held for over 20 years. Later he was also to become Churchwarden and during an interregnum his organisational skills and dedication were invaluable.

At Cogenhoe, later Higham Ferrers, where he also was Tower Captain from 1998-2013, and at Ecton, he gave his time to teach new ringers. His ability to clearly explain the technicalities of change ringing taught many to be confident and successful ringers.

Over time Denis specialised in church projects, becoming resident architect for numerous churches throughout Northampton- shire with the usual quinquennial duties. His combination of ringer and architect was invaluable to the Peterborough Diocesan Advisory Committee where he acted as their Bells Advisor for Parochial Church Councils. In 1980 he was appointed Guild Steward for Peterborough Diocesan Guild of Church Bellringers, holding the post for 27 years.

AitchDenis never managed to get round to properly retiring. His interest in architecture continued and even in his last few months he was still being approached for work and advice. Sadly, Denis didn’t see the completion of his final project, the restoration of the bells of St Mary’s, Higham Ferrers being carried out at Taylor’s Bell Foundry with installation due by mid-2014.

For the statisticians amongst you Denis rang over 450 peals and over 350 quarter peals spanning a period of 55 years. He was also part of the band that rang 10,208 yorkshire Surprise Major at Burton Latimer, which remains the longest length rung by the Peterborough Diocesan Guild.

From a young age, Denis held a great interest in art, producing detailed line drawings and occasionally dabbling in sculpture. In the late 90s Denis’s creativity became known nationally, or rather his signature Aitch cartoon character did. He made his public appearance on a millennium recruitment leaflet produced by Peterborough Diocesan Guild of Church Bellringers. Aitch then made his Ringing World debut in the 23rd January 1998 issue with Denis’s witty takes on ringing culture becoming a regular feature for many years. Outsiders would be left bemused, insiders would smile knowingly. Some even wore the Aitch t-shirt!

Aitch also made an appearance at the ‘Inspired by Bells’ exhibition in London in March 2011 as part of The Ringing World’s centenary celebrations. As well as a montage of cartoons, Denis’s treasured wooden Aitch sculpture was exhibited. This same montage and sculpture were also fittingly on display at his funeral.