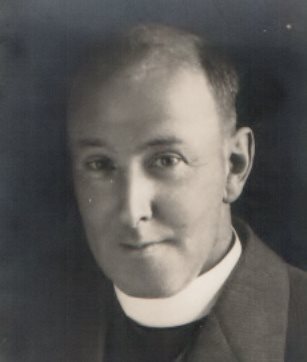 The death of the Revd E S Powell has removed from the Exercise one whose contributions to the art of ringing have been considerable, both in the theoretical and practical fields. At the time he was completing his education at Oxford at the turn of the century, E. S. Powell had not taken up ringing, nor did he do so until several years later. It appeared that mathematics was his strong point, for he was a scholar of Christ Church and later achieved a first class in Maths. Mods, and in his Final Schools. However, he desired to enter the Church and after taking Holv Orders, he was appointed curate of Esher in 1899.

In 1903 he was appointed curate of St. Thomas’, Exeter, and it was here that he became attracted to ringing and learned to handle a bell. His next move was to Holbeton, Devon, where he became Vicar from 1906-1926. During this time his interest and ability in all that pertains to ringing were developing and maturing, and it is not surprising to see him becoming General Secretary of the Devon Guild (1913-1924) and its President (1924-1935). During the last few years of this Presidency he held the Rectory of Clyst St. George (1928-1935) and he was always very proud of being Rector of the church which had previously been in the charge of H T Ellacombe.

It is by his work on the Methods Committee of the Central Council that he will perhaps be best remembered. He had begun to represent the Devon Guild on the Central Council in 1914 and in 1927 he was elected to the Methods Committee. Here with two others whose names are famous in the Exercise, H Law James and J Armiger Trollope, he was jointly responsible for the compilation of the Central Council’s “Collection of Doubles and Minor Methods”. Later the committee issued a similar work - the “Collection of Triples Methods” - and a notable contribution to this publication was E S Powell’s work on Erin Triples.

In 1928 he married Miss Molly Davenport of Sheffield, who was also a ringer, and for many years, in fact up to the time of his death, they were to have the great pleasure of sharing and actively pursuing a common interest. In 1932, taking the view that no up-to-date book existed by means of which newcomers to ringing might be introduced to the four standard methods, they undertook the joint authorship of “The Ringer’s Handbook”, which remains in print for beginners. In 1933 Revd E S Powell relinquished his residence in, but not his affection for, Devon, when the Dean of Christ Church offered him the living of Staverton, Northamptonshire, which he held till his retirement in 1946.

His ability made itself as apparent in Northamptonshire as in Devon and in 1935 he became Master of the Peterborough Diocesan Guild and remained so for 12 years. A visit to one of his practice nights, or better still, membership of one of his bands, would engender much admiration for his qualities as a teacher. He had all the attributes which make for success in such a sphere, namely, a thorough knowledge of ringing, immense patience with a beginner, a notable sense of humour, an ability to impart knowledge and an insistence on good discipline while his personal example as a ringer could hardly be bettered.

Needless to say, it would, never have done for the bells of the churches in his charge to be unsuitable for good ringing, and he was instrumental in securing the rehanging of the bells at Holbeton and Staverton.

He was not, in his own words, a prolific peal ringer, as he cared more for teaching, and strangely enough he kept no records of his peals, but it is estimated that he rang between three and four hundred; of these he conducted a good many. He was an able conductor, possessing to a high degree the attribute of knowing everyone else’s work as well as his own, and thus being able to correct trips quickly and confidently. The peal of which perhaps he had the happiest memories was one of Grandsire Cinques rung entirely by Devon men at Exeter Cathedral on January 6, 1926, and composed and conducted by himself. The time was 3 hours and 55 minutes, and the peal proceeded with scarcely a trip and felt most comfortable.

At the beginning of 1947 he retired from active work and went to live in Somerset.

At the Guild Annual Meeting held in Northampton on Whit Monday, after the service in St. Giles’ Church, a company of 103 sat down to tea. The President (the Archdeacon of Northampton), in a very appropriate speech, made a presentation to the retiring Master as a mark of appreciation of the great work he had done during the 12 years he held the office. The presentation took the form of an illuminated address framed in old oak, expressing appreciation of his efforts and good wishes to him and Mrs. Powell on retirement. It was accompanied by a roll of notes.

On June 21, a party from the Daventry Branch journeyed to Somerset to visit the Revd and Mrs Powell at their new home at East Stoke Lodge, Stoke-under-Ham. An early start was made, with members endeavouring to ring handbells through courses of Grandsire Triples, Plain Bob Minor, Grandsire and Stedman Doubles. After partaking of lunch in Bath they continued to Queen Camel, where they were met by the Revd and Mrs Powell, who had arranged for them to ring the heavy ring of six.

At East Stoke Lodge, where light refreshments were generously provided, a cheque and autograph album were presented to the Revd and Mrs Powell from branch members as a mark of appreciation of their work in the branch during their 13 years at Staverton. After ringing at Stoke, Martock and tea in the village hall and thanks accorded to everyone who had helped to make the tour so successful, a start for home was made at 7 p.m.

Revd Powell was visiting Sheffield and was ringing for evensong on September 28 in Sheffield Cathedral when he gave up his bell and a few minutes later died peacefully.

The funeral service took place at Stoke-under-Ham, Somerset, on October 2. The service was conducted by Preb E V Cox, the Revd A T Stevens (Shepton Beauchamp) and the Revd D Ballard (Stoke-under-Ham). The coffin was borne to the grave by six ringers. The bells were rung half-muffled before the service by the local ringers and open after the service. Among the many beautiful floral tributes were wreaths from this Guild.