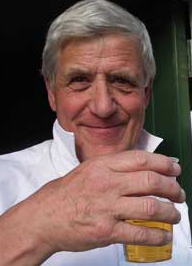 Paul Reading was born on 26th October 1947 in Kenilworth, Warwickshire. He wanted to maintain his link with St Nicholas’ Church after being in the choir until his voice broke so decided to take up ringing at this point. He was taught to ring by John Royal, the tower captain at Kenilworth, and a cobbler by trade. Paul was one of a generation of very talented young ringers in mid-Warwickshire who all learnt to ring in the 1960s including Geoff and Peter Randall from Warwick, Bob Sherriff and Spike Thorne from Southam and Tony Cox, Shirley Jones and Christopher and Steven Royal all at Kenilworth. Paul’s first peal at Stoneleigh in 1966 was also Tony Cox’s first peal and included Geoff and Peter who had only rung a handful of peals each at the time. Those three have now rung some 9000 peals between them. Paul’s peal total was a much more modest 99, but particularly in later years they were all rung for a special reason.

He was always a great enthusiast for ringing, as for his other interests in his life, not excluding real ale and red wine. In combining two of these pursuits he did once cause a bit of a ruction in the tower at Kenilworth. The tower AGM was always held on New Year’s Eve, with the formalities followed by several hours of drinking in the Virgin’s (aka The Virgins and Castle Hotel, a long-time haunt of ringers) and then the traditional ringing in of the New Year. One year Paul decided this would go with even more of a swing than usual when he arranged to have a barrel of beer placed in the tower so that the drinking did not to have stop on leaving the Virgins. This was not met with approval by one of the older members of the band who happened to be a tee-totaller.

As well as the life-long friends from Warwickshire he formed similarly long-lasting friendships at University in Cardiff where he got a good degree in Civil Engineering. Amongst his contemporaries here were David Llewellyn, Charles Quartley and Nick Simon. One of his friends from Cardiff recalls that he was always jovial company as they spent many happy hours together ringing and drinking.

In 1969 Paul moved on to Manchester where he successfully completed a MSc at UMIST – and continued his ringing with MUG and peals with the likes of Bob Smith, Marcus Sherwood and Ken Lewis. This was probably his most intensive spell of peal ringing. In September 1970 he found time to ring in my first peal at our home tower of Kenilworth – where I had followed Paul.

Paul started his professional career with IDC, for whom he firstly worked on projects in the Midlands which included motorway construction and the building of the NEC in Birmingham. At the beginning of 1972 he was sent to Llantrisant to build the L’Oreal factory. With his return to South Wales Paul once again attended the St John’s, Cardiff practice, where he met Liz Jacklin. In August that year they were married at Liz’s home tower of St Augustine, Penarth. Paul and Liz set up home in Aberdare where Liz obtained her first teaching job.

Their next move was to Bitteswell in Leicestershire in January 1974 with Paul working in Atherstone. He taught a band at Bitteswell and was responsible for moving the ringing chamber up from the ground floor. He also taught some ringers from Stamford on Avon and rang with them often. By 1978, with 3 small children, a further move was made to Cold Ashby. Paul pretty much rebuilt and extended their house around them and also started his own business as a consulting engineer so naturally his job, the house and the three boys meant there was only time for occasional ringing. As Peter, Tom and Will grew up he did teach them all to handle a bell but none of them really took it much further. Paul rang sporadically throughout these years but eventually started attending Rothwell ringing practices and also was instrumental in the refurbishment and augmentation from 4 to 6 at Cold Ashby, once again teaching a young band to ring in the village He was now regularly ringing at Rothwell as well as occasionally supporting local practices at Spratton, Long Buckby and Yelvertoft. He continued to arrange ringing at Cold Ashby much to the delight of all the villagers who “love to hear the bells rung”.

From around the turn of the century Paul once again began to ring in a few peals, often for special occasions. These included his first of Stedman Cinques at Towcester, which was a 21st birthday compliment to Tom, his middle son; Grandsire Caters at Sheffield Cathedral, his nephew Alan’s first peal at the age of 14; a peal to celebrate the life of our mother who died in 2002; the first peal on the four bells at Cold Ashby, prior to augmentation and of course the first peal on the six. He also took part in the one and only peal rung for the Institute of Civil Engineers, for the 200th anniversary of the birth of Brunel, appropriately in Bristol. Three of his last ten peals were specially arranged by Paul, all at Cold Ashby, all involving various family members, to mark respectively Tom’s wedding, Peter’s wedding and the birth of both their daughters, Paul and Liz’s first grandchildren in 2010. By this time Paul had been diagnosed with inoperable cancer of the pancreas. Despite this Paul continued as he had throughout his life to make the absolute most he could of his time, continuing with both work and ringing. He hoped to arrange his 100th peal with a band of longstanding friends, but sadly his illness prevented this from happening.

At his memorial service at Cold Ashby, a packed church included many ringers who were able to ring on ‘his’ bells to mark his passing. Some wonderful eulogies were made by clergy and all three of his sons. One remark stood out for me – when anything needed doing in the church, as a member of the PCC, Paul, ever a practical man, would quietly say ‘I’ll see to that’ – and he always did.

In arranging a peal to commemorate Paul’s life I was delighted to able to draw on all the people Paul had wanted to ring in his 100th peal, and appropriately it was rung on what would have been Paul’s 63rd birthday. Four of the band had rung in his 21st birthday peal exactly 42 years earlier, and it also included all who had rung in Paul’s first peal who are still ringing.