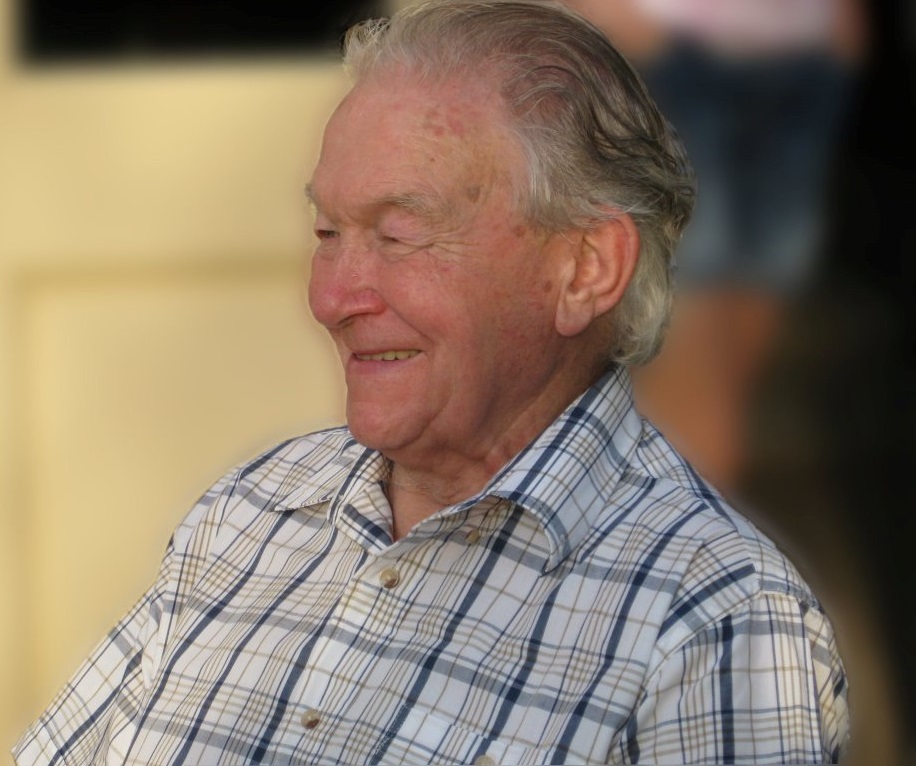 "The most dignified man I have ever known, throughout his life, Dad sought to help and gain the respect from everyone around him. He rarely complained about anything and found it difficult to say 'no' to anyone". These were the words of his son Peter said at Derek's funeral on May 25, 2018.

It has been my privilege to have known and rung with Derek since 1989 when I first went to Woodford Halse as a Chipping Warden ringer. Many years later I asked him how he got started and this is his story as told to me.

He had been ringer in the Byfield area for 67 years, ringing his first bell in the summer of 1951 at the age of 26 whilst out with his best friend and brother-in-law Percy French one summer evening. They had called in to the New Inn pub (now the Cross Tree) at Byfield for a drink where they met and chatted with Fred Hutt. At the time, Derek was a railway fireman and Percy a guard on the newly nationalised British Rail. Fred Hutt was with a young locum vicar in Byfield that summer who wanted Fred to teach him to ring bells during his six week stay in the area. Derek and Percy were not interested in ringing but thought that if they went up the tower with Fred and the young vicar, they might be able to get a fine view across the village, so they duly followed.

However, on their way down, and passing the ringing chamber, a very persuasive Fred managed to get them to step inside and have a go on the then, ring of six. And that’s how it all started. He quickly learnt to handle a bell and to ring in rounds. Not long after, he was asked to cover on the tenor for a touch of Grandsire Doubles.

The next year (1952) he became a member of the Daventry branch at its AGM and to this day has proudly kept all his old membership cards and photographs in safekeeping. Other Byfield ringers at the time were Fred Hutt (Captain), Bill Lewis, Cyril Nicholls, Jack Haynes, Walter Callow, Vic Perry (from Weedon), Len Catlin, Reg Fennell, Bill Steel (his uncle), Harry Catlin, Percy French (brother-in-law), Eric Catlin, In 1957, after a difference of opinion with the then incumbent regarding proposed changes to the layout of Byfield church altar, his Uncle Bill Steel transferred his ringing allegiances to Boddington tower, so Derek followed him, but continued to ring at Byfield occasionally over the following years.

Maurice Bourne was the tower captain during this time at Boddington and was having difficulties with the tenor, which was proving some what difficult to ring. Bill Steel arranged for the apprentices at Timken Engineering, to make replacement housings and fittings as a test project. So Derek, along with Bill and Maurice became involved with replacing the old plain bearings for new roller bearings with resounding success.

During this early period of his ringing, Woodford Halse bells were unringable. They had not been rung for some years and had been allowed to fall into a state of disrepair with broken wheels, ropes and stays etc. By 1974, Derek lived in Woodford Halse but was still ringing at Boddington. He was approached by the new rector the Revd Hayden Smart to see if he would assist in helping them to get the Woodford Halse ring of five bells, back into working order. Derek advised that rather than replace the old frame with a new 5-bell frame, they should, for just £50 extra, buy a 6-bell frame as it would encourage other ringers to come along. Funds were duly raised, with a sixth bell being paid for by George Bird and his family. The ringing chamber was raised from the ground to its present position and details of the floor structure strengthened to take the weight of 12 ringers not just six, after Derek advised that if, and when they joined the Guild, they would be expected to hold Branch meetings.

The bells were dedicated in 1975. The following ringers of Woodford Halse tower became members of the Daventry Branch. Gerald Smith (Captain), Alf Colley, Marjory Lock, Pam Edwards, Margaret Allen, Derek Thornton. In 1978, the tower joined the Culworth Branch and in 1987 Derek took over as tower captain when Gerald Smith became a lay reader assisting Hayden Smart. In 1980, the 4th bell developed a crack. Derek and Roy Thompson removed and lowered the bell and transported it to Soundwell, Cambridge where it was welded at a knockdown price of £400. They then lifted it back into place and it has rung untroubled ever since.

On May 21, 2011 Derek fell head-first down the stairs from the ringing chamber at Woodford Halse. Many thought he wouldn’t make it through that night, but he did. Although he was in an induced coma and gravely ill for many weeks he pulled through. He came back to continue ringing and enjoyed several outings and branch dinners with the Culworth Branch until he got into his 90’s and found climbing tower steps too much to cope with. Derek’s last ring was at Chipping Warden in September 2017.

During WW2 he was sent down the mines but during his training he incurred a shoulder injury and escape being a Bevan Boy. This injury was to cause him difficulty later in life with his ringing as he had to lift his left arm up to the sally using his good arm, ready to ring. This was the reason that during his long ringing career, he only managed three quarter peals and never a full one.

Derek’s other great love, after his wife Sybil, was the railways and specifically The Great Central Railway. He started as a locomotive fireman on the foot plates with British Rail – Central Section. Some years later he was to complete the training and passed the exams necessary to become a train driver, only for it to be cruelly snatched away from him before he got the opportunity to officially drive one. The announcement to close the line in 1966 came within weeks of him passing. He never forgave the government for this act. Derek should have become a railway historian as he knew so much about its history. He could still talk you down the line from Woodford to London Marylebone, naming all the gradients and junctions along the whole journey. During a family gathering in the summer of 2016 he went to Loughborough to enjoy a day riding a steam train on the Great Central railway. The driver, learning of his Great Central legacy immediately invited him to ride on the footplate plate to the next station. It was a grand day for him.

Derek also had a love of motor bikes. Into his late 80’s (he might even have been 90) he was driven pillion passenger around the Isle of Man TT circuit by his son as that year’s championship came to a close. They chased the safety car on its final check lap before it got handed back as a public road again. For more than a decade he served on the School Governors board, The Parish Council, the RAOB and was also very active in the Woodford Halse Church and of course as tower captain from 1987 to 2011.

In 2013 he was proposed by the Culworth Branch as an Life Honorary Member of the Peterborough Guild of Bellringers and elected for his services to ringing. Derek was with us for almost 93 years, which is something to celebrate. He was a good friend to have.