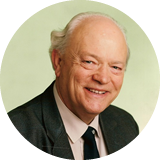 At the age of 14 he became the organist at a Peterborough Workhouse Institute Church and at 15 became organist at Whittlesey, Cambridgeshire, where he learned to ring in 1948. His first quarter peal was rung on March 13, 1949 and his first peal on June 4, 1949, both on the treble at Whittlesey to Plain Bob Minor conducted by F H Newman.

Other towers to which he was attached were Canterbury Cathedral, 1953-1956 and St John, Peterborough from 1967 onwards and where he was tower captain. He was a regular attender at Rothwell practices where he progressed to Surprise Major ringing.

Malcolm gained the Henry Smart scholarship (Organ) at the Royal Academy of Music. He held organist positions at Peterborough and Canterbury Cathedrals, and worked for a time in South Africa. Upon his return to the UK he became Music Advisor for Banffshire, and then for Northamptonshire. He is widely credited for founding the Northamptonshire Music and Performing Arts Trust, of which the Guild is now appropriately a Community Partner.

He was initially a member of the Ely Diocesan Association and joined this Guild at St John’s Peterborough in 1966 or 1967, was branch organist for 1968-9 and maintained his membership of the Guild through St John’s even after moving to Weston Favell by 1970.

After his first peal in 1949 for the Ely Association, he did not ring another until his first for this Guild at Warmington on April 4, 1968, after which he rang 46 in 1969 and many more. He rang in a peal of 60 Spliced Surprise Major at Rothwell on March 10, 1973. He circled the tower at Thornhaugh on July 7, 1974 and at St. John, Peterborough on September 13, 1975. He completed the alphabet to peals of Surprise Major at Rothwell on December 27, 1974. He rang his 200th peal at Earls Barton on October 15, 1976. He joined the Society of Royal Cumberland Youths and rang a peal at St John’s Peterborough for that Society.

Malcolm was Master of the Guild from 1970 till 1979. Until work commitments as County Music Advisor curtailed his ringing activities, he was a very proactive Master, including organising at least one residential course for young people at Grendon Hall which included a rope splicing session. In readiness for the Guild's Golden Jubilee on January 5, 1974, he arranged for ringing at Rothwell by a chosen Guild band to be included in the BBC's Christmas Bells Broadcast. He was elected a Life Honorary Member on June 14, 1980. He was one of our CCCBR representatives from 1971 - 1982 and an Honorary Member of CCCBR from 1985 – 1993. His ringing never got going again after he broke his ankle falling on ice.

Whilst serving at the County Music Service he brought groups together for a number of successful “Northampton Nights” at the Royal Albert Hall, performing massed performances of works. In 1991, Malcolm conducted a full congregation of singing ringers at St Martin in the Fields for the BBC Bellringers’ Songs of Praise programme. In retirement, he had a weekly classical music spot on BBC Radio Northampton and, for several years, produced his own Christmas Bells broadcast featuring local diocesan towers.

Malcolm died peacefully at home on February 1, 2010, aged 80. The Funeral Service, for family and close friends, was held at Northampton Crematorium on Tuesday, February 16 at 1.15pm. There was a memorial service, organised by Lyndon Hilling, at St Matthews Church, Northampton on Saturday, May 8, 2010 afternoon.