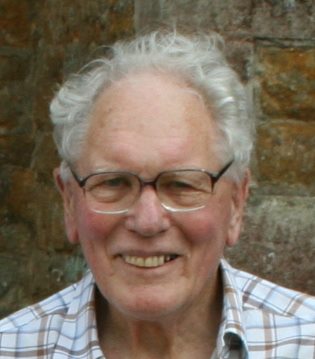 His father was on service in Hong Kong when Peter was born at Larkhill garrison. When three, the family began three years in Gibraltar. Peter left school at 14, during bleak 1941 and became an army apprentice armourer.

He soon began a lifelong habit of writing to the RW Editor: April 1946, combining technical and literary items; August, in support of a servicemen’s guild embracing ex-servicemen; in 1947, an inscription about backward rounds.

In 1948 he was drafted to Malaya with the Royal Artillery, then as a corporal to the Gurkha Rifles and as sergeant with the Royal Hussars. Here, Peter found a new life-long love - recreational flying - solo in Tiger Moths. He did not ring for 19 years. He undertook motor vehicle training and became a staff sergeant in 1954 in the Suez canal zone, where he started to enjoy instructing. He was moved to Cyprus in 1955 as acting Warrant Officer with an armoured car division where he lived under canvas.

His tent-mate knew a nice girl who did not have a boyfriend and asked if Peter would like to be her pen friend. Six months later, Peter met Mary under the clock at Waterloo Station! After approval by five of Mary’s aunts, they were married in March 1959 and lived in Slough. Out of the army, Peter found himself back on the shop floor. He said that without Mary he could not have managed this change from his military upbringing. On a course in Dagenham, he discovered that Ford needed new instructors at Langley, near Slough! He frequently thanked Henry Ford for looking after him as part of the Service Operations Review Team as Mary and he were moved to Windsor, Chester-le-Street, Tetbury and then Daventry, where Peter became chief instructor at the new Ford College until he retired.

In 1966 Chester-le-Street bells beckoned Peter to ring his first quarter peal for 19 years, conducted by Dennis Bayles. He also rang during business visits to Essex. Besides three more quarter peals, letters to the RW appeared, as did Susan, born in 1967 just before they were moved to Tetbury! There, a date touch of 1968, was followed by two peals conducted by Dennis Chapman. Nic was born in 1971 and a nearby gliding club distracted Peter into becoming a pilot instructor until they moved to Daventry! Even here, he was involved with the ATC, had a helicopter flight for his eightieth birthday and a glider flight early in 2015.

Richard Waddy brought Peter back to ringing and a quarter peal in March 1980. I reckon he rang about 125 quarter peals, frequently in and around Daventry. He conducted Nic’s first quarter peal in May 1988. His memory was getting worse, he even went home leaving his dog tied to a tree in Badby Woods. After a triple heart by-pass operation in 1996 his concentration improved. His penultimate quarter was in 2013 at Braunston in memory of Mary and the last was Plain Bob Royal in memory of Denis Pearson.

He introduced his many recruits to the wider fraternity of Daventry Branch but eschewed office except as Ringing Master in 1990 and a spell as press correspondent. By the mid-1980s he became active in ringing training and residential courses. He helped organise the CCCBR school at Daventry in 1991 and was course secretary at Sparsholt from 1992–2002 where the combination of instructing and contributing to pantomimes were just his thing. He also went to Grantley Hall, Essex, Moreton Morrell and Wantage.

From 1987, contributions to the RW increased by epidemic proportions on a vast array of topics: recruiting, training, lightning conductors, emergency lighting and many snippets and rhymes by “PDW”. He began to write a series of pamphlets, as he needed them for his trainees. In 1996 Sally Thompson helped him publish them as ‘Bell Ringing in Instalments’, with donations going to the PDG Bell Fund. He was elected a Life Honorary Member of the Guild for outstanding service in 2004.

Peter and Mary took part in several outings and holidays and supported the 43-ers. Peter set up the Wednesday afternoon group ranging over adjoining counties in 1989, complete with urn and teapot. He ran it for 11 years until Pam Bailey helped out. He assisted the CCCBR with the Network for Ringing Training from 2001, participated in internet ringing chat, avidly read technical magazines and books, especially about flying and passed them out with his recommendation.

After retiring, in June 1992, Peter and Mary moved to Braunston, where he was invited to form a new band. He duly developed a very sociable group, whilst remaining a linchpin of the Daventry band. John Gwynne of the new band installed simulator equipment at Braunston in 1994. Peter set up special training courses to order and roped in his helpers. He developed the Monday afternoon club to train mature recruits for Ringing in the Millennium but it still runs, complete with tea and cake.

He suffered a physical set back after falling from the tower ladder in 2011. At his funeral the Revd Canon Sarah Brown said she first met him shortly after this and was amazed by his determination to continue as if nothing had happened! When Mary was suffering from depression and ill health he kept everything going. When she died, despite missing her grievously, he was back in the tower the same week and last rang on July 23. He clearly saw dying as his next project; almost an adventure to look for Mary. He left sooner than expected, weakened but sitting in his chair at Danetre Hospital. Peaceful, not prolonged, with dignity and without fuss. He will be missed.