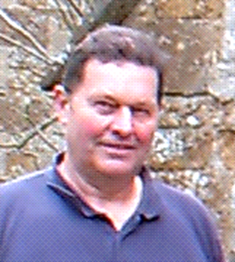 Suddenly Bryan Williams wasn’t there. There were gaps in three quarter-peal bands; for a tutor at a Stedman Doubles training session; at Whilton & Badby practices; at Whilton Sunday ringing; for an organist at Norton and for the Secretary at the imminent Peterborough Diocesan Guild executive meeting .....

Bryan was born on 16th September 1931, just in England at Chirk Bank, and went to nearby Oswestry Grammar School. He started work at the NCB laboratory in Oswestry where he met Beryl and they both qualified as industrial chemists. They were married in 1959 and both taught chemistry at Hemsworth Grammar School. In 1963 Bryan was appointed Head of Chemistry at Christ College, a boarding school in Brecon, where they settled and raised two sons. Besides playing the organ and singing in the choir at school and the Cathedral, he took up ringing at St Mary’s, Brecon in 1977. He became Treasurer 1981-5, Master 1986 and Secretary 1987-1991 of the Swansea & Brecon Diocesan Guild.

After retiring in 1991, they looked for a new home to match their mutual interests of industrial architecture, and respective interests of gardening and ringing. They ended up in 1993 at Whilton with a large garden and many nearby towers. Bryan was soon ringing throughout the area and joined the local Daventry branch. Whilton bells were being renewed from six to a heavier eight and Bryan became involved in the project. Whilst not succumbing to offers of a branch post, in 1998 he became Secretary of the Peterborough Diocesan Guild, a post he undertook to the last pro-actively, accurately, fairly and meticulously.

Earlier he had helped teach a band at Builth Wells and taught a band alone at Norton, as well as being organist there. He supported many practices where he delighted in helping anyone, through the maze of methods and jargon. His long, clear, patient expositions were legendary. He supported training and the sessions that he ran were always crystal clear and interesting. He had a selfless enthusiasm for all he did in a modest, calm, supportive and reliable way.

Bryan was not a prolific peal ringer. He rang some 26 for the Swansea & Brecon DG. His first peal, treble to Plain Bob Major at Brecon, was rung on 23rd August 1980. He was elected to membership of the College Youths on 10th October 1984 for whom he rang three peals between 1990 and 1993. For the Peterborough DG, he rang thirteen more, of which the highlights were the funeral peal at Great Brington for Diana, Princess of Wales and the first on the new eight at Whilton on 7th September 1996 as a farewell to Canon Jim Richardson, who had united the eight parishes into the new Spencer Benefice and oversaw two bell restorations. Bryan’s last peal was of Cambridge at Whilton on 19th August 2000.

Bryan was happier ringing quarter peals. He rang his first on 18th March 1978 at St Mary’s Brecon and another 240 in the same tower, out of his total of over 300, conducted four, before he moved eastwards. Then he rang over 100 more, many being surprise major methods. Bryan left Brecon too soon to ring on the ten at the Cathedral and whilst knowing the details, he hadn’t rung there. He claimed not to be a ten bell ringer, but did ring one peal of Grandsire Caters in Northampton in 1997.

He had written a book about two local church organs and was writing up his research into the history of the Central Northamptonshire Association and its predecessors, which became the PDG in 1924. In the meantime he had also researched a book on The Great Bell of Cosgrove, which is practically finished.

Bryan died suddenly on Sunday 13th November of a pulmonary embolism, having played the organ for the Daventry branch meeting at Kilsby the previous day, as he had done for many ringers’ services. Most were surprised to find that this apparently fit, upright, well built man with black hair was as old as 74 years.

Before his funeral, a nicely representative quarter peal of Plain Bob Minor was rung at nearby Ruabon, by five Peterborough DG officers and the Treasurer of the Swansea & Brecon DG, Paul Johnson, who took over the post from Bryan in 1986.

On Friday 25th November, Bryan was cremated, according to his wishes, at Pentre Bychan Crematorium, near his birth place. A simple service was said by Revd. Chris Goble of the Spencer Benefice, devoid of any singing in deference to Beryl’s dislike for it, whilst a similar service was said simultaneously at Whilton by Janet Bowers.

We remain contemplating and missing the great contribution that Bryan made to our ringing.